I have been honored to be awarded as a Microsoft MVP eight times since 2009. The next award cycle begins on July 1st, and I have learned that I will not be among those re-awarded.

While it is disappointing to hear, as I have not changed my own level of engagement with the community, it is not completely unexpected. The Microsoft developer community is thriving today. There are more developers stepping up as community leaders than ever before. As they push the bar higher, the rest of us need to push ourselves as well.

My readers will not notice any changes to the Morning Dew based on this news, other than the MVP logo disappearing from my blog’s sidebar. I will continue to do what I do every day. You will see an increase in activity on my other blogs, WPF Tips and the newly launched UWP Tips. Be sure to check them out.

Also be sure to connect with me at TechBash 2017, the conference that several current and former MVPs (including me) started last year with TechBash 2016. We’re going to have a blast again at the Kalahari Resort in Pocono Manor, PA this fall. This non-profit developer conference has been our baby since mid-2015, taking many hours of our time every month to plan and host. It easily doubled my time working for the community over the last two years. Ping us (info@techbash.com) if you’re interested in helping out as well.

I would like to thank the MVP Award program for many great years of engagement. I am looking forward to joining MVP Reconnect and perhaps rejoining the ranks of the MVPs again someday. Thank you to Esther for being a great advocate for a number of years in the program. Thank you to Joe for reaching out personally to break the news and for doing it with class. And a huge thank you to everyone who already reached out on Twitter and Facebook when I announced the news this week.

EDIT: Adding a huge thanks to my family for supporting me over the years. My commitment to the Microsoft community has taken countless hours of my time. They have been hugely supportive of the time spent and travel required.

Congratulations to all of the soon to be announced new and returning MVPs! Keep doing great things and keep pushing the bar higher. 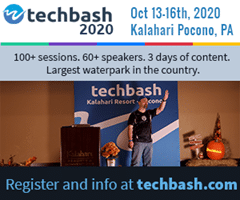